In the last 2/3 years I have become a bit of a Bill Bryson fan. For those that don’t know, he is best known as an American travel writer. I have only completely read 2 of his books and I am currently on my third with many more to go. He is one of a few authors who actually make me laugh out loud when reading his books. At the moment I’m halfway through ‘In a sunburned country’ – this particular book is about his travels in Australia. 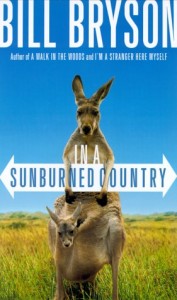 The following is an excerpt from this book. It is Brysons description of the game of cricket. The best description I have ever heard…

“After years of patient study (and with cricket there can be no other kind) I have decided that there is nothing wrong with the game that the introduction of golf carts wouldn’t fix in a hurry. It is not true that the English invented cricket as a way of making all other human endeavors look interesting and lively; that was merely an unintended side effect. I don’t wish to denigrate a sport that is enjoyed by millions, some of them awake and facing the right way, but it is an odd game. It is the only sport that incorporates meal breaks. It is the only sport that shares its name with an insect. It is the only sport in which spectators burn as many calories as players – more if they are moderately restless. It is the only competitive activity of any type, other than perhaps baking, in which you can dress in white from head to toe and be as clean at the end of the day as you were at the beginning.

Imagine a form of baseball in which the pitcher, after each delivery, collects the ball from the catcher and walks slowly with it out to center field; and that there, after a minute’s pause to collect himself, he turns and runs full tilt toward the pitcher’s mound before hurling the ball at the ankles of a man who stands before him wearing a riding hat, heavy gloves of the sort used to handle radioactive isotopes, and a mattress strapped to each leg. Imagine moreover that if this batsman fails to hit the ball in a way that heartens him sufficiently to waddle forty feet with mattresses strapped to his legs, he is under no formal compunction to run; he may stand there all day, and, as a rule, does. If by some miracle he is coaxed into making a misstroke that leads to his being put out, all the fielders throw up their arms in triumph and have a hug. Then tea is called and everyone retires happily to a distant pavilion to fortify for the next siege. Now imagine all this going on for so long that by the time the match concludes autumn has crept in and all your library books are overdue. There you have cricket.”