So Toronto ay? or Canada?

I like it here. It’s my type of place. Why? Well, settle in for the next while and you’ll find out. If you think you might know me, you probably don’t or never will but maybe this might help…

My impression so far is that Canadians (or more specifically Torontonians) do not judge you or one whatsoever. They’re an easygoing and polite sort of people. Example – I’ve just disembarked the bus home and the whole bus journey home I sang – not in your face singing, but, you know, I kept the masses entertained (or so I thought).  Now, just before embarking the bus, shortly after disembarking the subway, I sat with my friend Daryl and an Ethiopian guy on top of a trash container, otherwise known back home as a bin. A fairly sizeable bin considering it could fit 3 people comfortably on top. Of course me being me I ask the Ethiopian guy if he was familiar with Haile Gebrselassie? Sure doesn’t every Ethiopian know him, wasn’t he a legend of an athlete back in the day?! I also asked him if he happened to be a runner too because lets face it the only Ethiopians I know (apart from those we were used to seeing back home during Lent on a Trocaire box) are the feckers that ya see every Olympics beating our one and only slim hope of a medal. Guess what? I don’t think he had a fecking clue what in the world I was on about. In all fairness, would ya blame him?

I got up this morning and made my way  to The Galway Arms pub in order to watch the Ulster and Connacht finals. Now, picture this – I got up at 8am, had a shower, made a cup of coffee, looked in the fridge, decided to grab a cupcake and that was my breakfast. A while later myself and Daryl arrived (after a bit of a trek) at The Galway Arms, paid 20 fecking dollars each to enter and sat down to enjoy the days festivities. Festivities being a big screen in a pub surrounded by a quare mix of lads just off the boat, ex pats and the odd local who bled greener than The Clancy Brothers. To our disgust the bar did not open till 11am! However, at least they did have free tea and coffee, so we availed of that for the time being and once 11am arrived, two  pints of Guinness were called for. 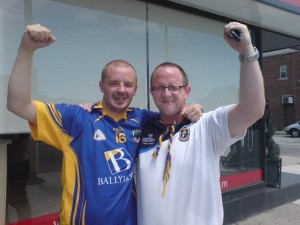 That’s were it all went downhill. By the way I forgot to mention I was wearing a Roscommon jersey and if ya don’t know by now Roscommon decided to beat Sligo and win their first senior Connacht football final since 2001 which meant literally everyone and anyone was coming up and congratulating me – little did they know I was a proud Dub. So I generally said nothing and shook their hand, smiled and just pointed at Daryl (at this stage Daryl was standing beside me, lost for words with his mouth open trying to grasp the result of the match) . Now that worked well for a while but there’s only so long I can stay silent, especially after forty ten pints and a half of Guinness.  Jaysus and once I did open my mouth, the bloody confusion I caused! or maybe more correctly – disdain! But I kinda like defending being a Dub and in some ways I love it when someone decides to go and have a crack at us – if it makes you happy, go ahead boss. Please just try and lose that chip on your shoulder… you’re the one that comes across like a prick!

Anyway, The Galway Arms. The two finals finished (Tyrone defeated Monaghan in the Ulster final) and we stayed there and like every good Irishman in a pub, we kept drinking. After a good few pints of vitamin G we moved on to the shorts. We met a family from Leitrim, a daughter, her mother and grandfather and some other relations and we all had a right aul hooley.  Jaysus between waltzing (you’d be proud of me Mam), jiving, singing, talking, drinking and joking… wasn’t it just like being back home.

I guess that takes me back  to singing on the bus on the way home (13 or 14 fecking hours later) and the Ethiopian. Ok, so he mightn’t necessarily be Canadian or drinking in an Irish pub full of Irish people might also not be Canadian – but hey, this place is so unbelievably multicultural and cosmpolitan, that its actually surprising to meet someone who will actually tell you they’re Canadian! They might put ‘ay’ on the end of every sentence and tell you this or that is awesome but you’re guaranteed if you ask them where they’re from they’ll tell you they’re Italian, Portuguese, Greek, German, British, Brazilian, Spanish or Ethiopian… before they’ll tell you they’re Canadian. But maybe that’s a good thing?

Does that at all explain why I think Torontonians are polite, easy going and non-judgemental? I don’t think it does. I had a point! I swear I did!